On June 29, the settlement prices were $3.35 per bushel for the December corn contract on the Chicago Mercantile Exchange (CME) and $8.61 per bushel on the November CME soybean contract.  These settlement prices suggest harvest-time prices near mid-2000 levels, much lower than what has been experienced in most recent years, particularly before 2018, when U.S.-China trade difficulties occurred.  The impacts associated with COVID-19 have further lowered price expectations for 2020 harvest-time.

The December corn contract traded on the Chicago Mercantile Exchange (CME) is the “harvest-time” contract for Midwest states.  In February, the settlement prices of the December 2020 contract averaged $3.88 per bushel (see Figure 1). This $3.88 average is the projected price for crop insurance products sold in Midwest states. 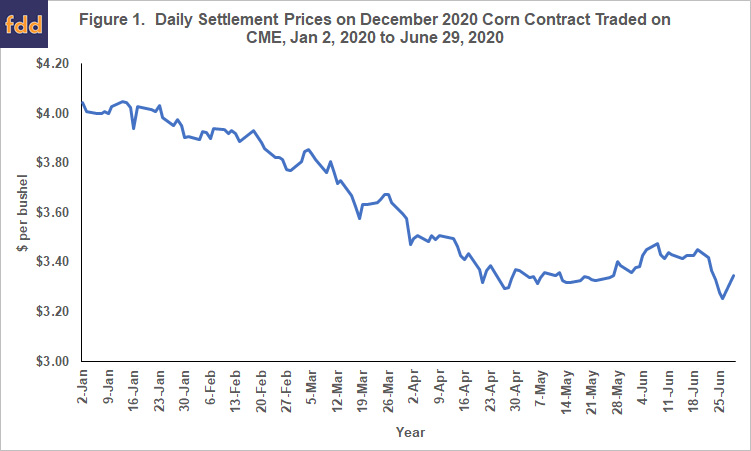 In March through April, Coronavirus concerns and COVID-19 control measures came into focus, leading to large declines in the December 2020 contract (see Figure 1).  During May, the December CME contract averaged $3.35 per bushel, a 14% decline from the projected price.  Prices increased somewhat in early June, but then declined in recent days.  The settlement price on June 29 was $3.35 per bushel, the same as the May average.

The 14% decline from February to May is the largest decline for the period of any year from 1985 to 2020 (see Figure 2).  From 1985 to 2020, the average percent change was 0%, consistent with efficient markets in which the price of the December contract serves as an unbiased indicator of futures prices at harvest-time.  The next largest negative decline occurred in 2001 when the price change was -11%.  Returns in 2001 were low and associated with an extended period of low returns that began in 1998. 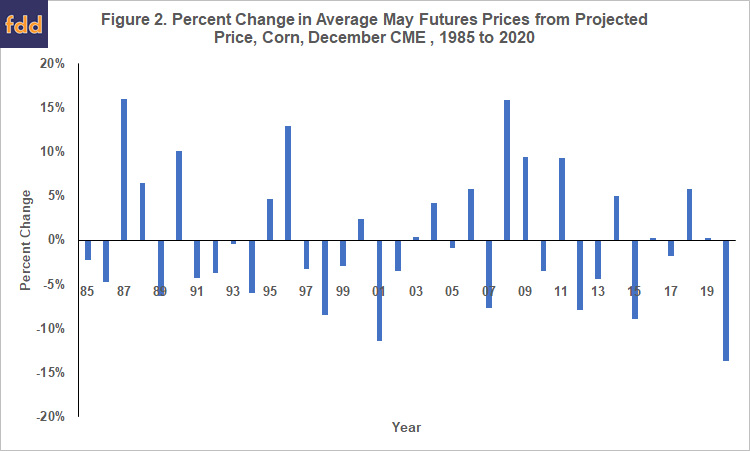 Overall, prices were not high at the beginning of 2020 (see Figure 3).  The 2020 projected price of $3.88 per bushel is the lowest projected since 2006 ($2.59 per bushel).  In the years following 2006, increased corn use in ethanol and low corn yields led to a period of higher prices, with a peak of $6.01 in 2011. Projected prices have since trended down, particularly after 2013.  From 2015 to 2019, the projected price averaged $4.01, with the 2020 projected price being lower than the 2015-2019 average.  Relatively low prices at the beginning of 2020, combined with the large COVID-induced price declines throughout the spring, has resulted in the very low expectations for harvest corn prices. 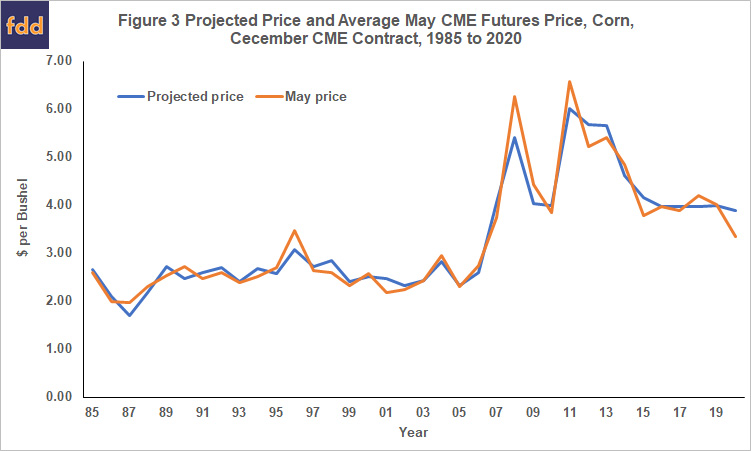 The November CME soybean contract during February averaged $9.17 per bushel.  This $9.17 serves as the soybean projected price for crop insurance contracts in Midwest states.  Similar to corn, COVID-19 resulted in large declines in March and April, with settlement prices during May averaging $8.51, a decline of 7% from February (see Figure 4). During early June, November contract prices increased, reaching levels near $8.80 per bushel. In recent days prices have declined again, with the June 29th settlement price at $8.61 per bushel, only $.10 higher than the $8.51 May average. 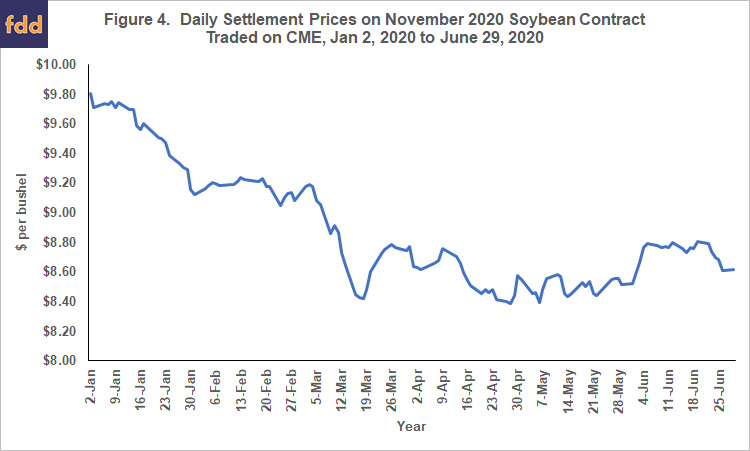 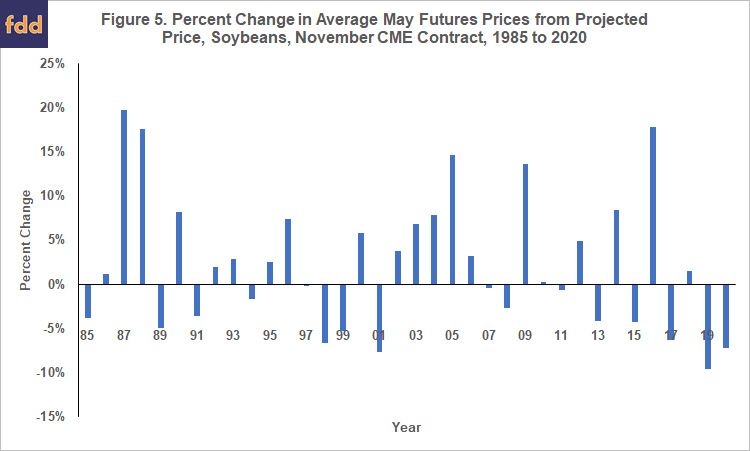 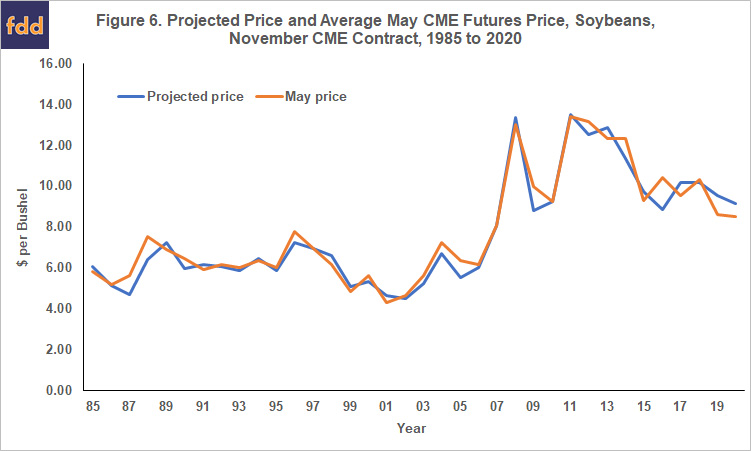 As indicated by 2020 projected prices, price expectations for corn and soybeans were already relatively low coming into 2020.  These lower prices generally resulted because of slowing growth in use of corn beginning in 2013 and, more recently, the continued impacts of China-U.S. trade difficulties which have caused slowing soybean exports (see farmdoc daily, June 10, 2020).   In the past several years, Market Facilitation Program (MFP) program payments softened the financial impacts of slowing export use.  Even without Coronavirus concerns, income expectations for 2020 were low because of the continuing impacts of China-U.S. trade difficulties.

The impacts of COVID-19 control measures have further lowered price expectations.  Current levels of futures price serve as indicators of prices at harvest-time.  The December CME corn contract of $3.35 per bushel and November CME soybean contract pf $8.61 per bushel suggest harvest-time prices at levels comparable to the mid-2000s, a period before the price increases caused by increasing use of corn in ethanol and continued growth in soybean exports to China (see farmdoc daily, June 10, 2020).  Prices at mid-2000 levels will result in low returns without continuing government aid (see farmdoc daily, April 7, 2020).

USGC program enables cooperators to purchase and ship U.S. commodities to new or emerging market for trials with targeted end-users

Canada is one of the world's biggest wheat exporters, and the top canola producer

Buyers will have to rely on smaller private storage facilities for wheat purchases, exacerbating fears of food shortages